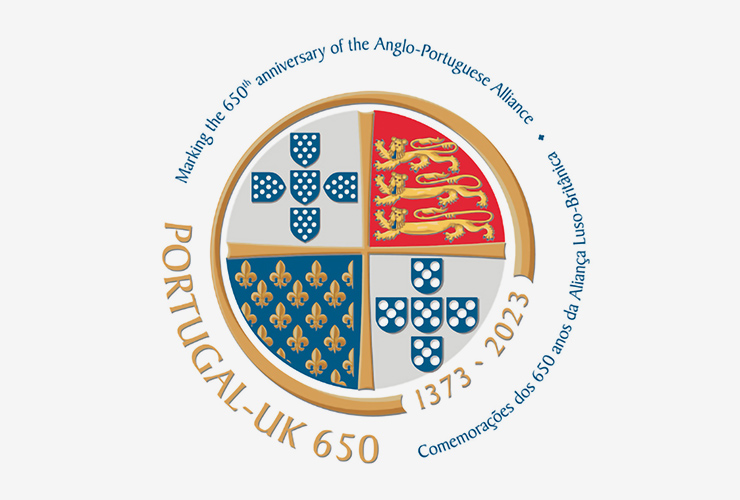 A lunch commemorating the 650th anniversary of the signing of the Treaty of Tagilde, signed on 10 July 1372 and ratified in London in November 1372, was held this Thursday at Queen's College, Oxford University. This treaty gave rise to the Treaty of Peace, Friendship and Alliance signed on 16 June 1373, in St Paul's Cathedral, which formalised the beginning of the Anglo-Portuguese alliance.

The event, organised by the Portugal-UK 650 initiative in partnership with Wines of Portugal and Queen's College, included a Masterclass on Portuguese wines led by the only Portuguese-speaking Master of Wine, Dirceu Vianna Jr, and with the participation of Amanda Lloyd, from Taylor's Port Wine, and Frederico Falcão, the Wines of Portugal CEO.

This was followed by a talk by the president of Portugal-UK 650 initiative, Maria João Rodrigues de Araújo, on the Anglo-Portuguese Alliance, its relationship with Oxford University and the role of the wine trade in the Alliance. John Methuen, for example, who gave his name to the Methuen Treaty, also known as the Cloth and Wine Treaty between Portugal and the United Kingdom, studied at Edmund Hall of Oxford University.


This action had a very attentive and participative audience, made up of Fellows from all the Colleges of Oxford University.

It was also possible to attend the Carol Service, which completely filled the Chapel of Queen's College, Oxford University, in which Christmas carols were performed by the Queen's College Choir, conducted by Owen Rees, a professor at the university who specialises in Portuguese and English music from the Renaissance period.

Maria João Rodrigues de Araújo, president of the Portugal-UK 650 initiative, explained that "this action is part of a set of activities that are being promoted by Portugal-UK 650, along with a hundred partner entities. Around 110 activities have already been organised in both countries, in the areas of research, education, culture, trade, cooperation, military and social, with the aim of celebrating and making known the history of the Alliance, writing new chapters of friendship, cooperation and trade, developing scientific research about it, and promoting the values of the Alliance's founding Treaty in today's world.

"There shall henceforth be between us a true, faithful, constant, mutual and perpetual peace and friendship, union and alliance and bonds of sincere affection" (Article I, Treaty of the Alliance, London 16 June 1373) - appealing to the responsibility and commitment of each one.

Portugal-UK 650 is the initiative responsible for the commemorations of the 650th anniversary of the Anglo-Portuguese Alliance and has the High Patronage of His Majesty, King Carlos III and His Excellency, the President of the Republic of Portugal.

Queen's College of Oxford University has many historic links with the Anglo-Portuguese Alliance:

Queen Catherine of Braganza, daughter of King John IV, the great protagonist of the Restoration was Patroness of the College, where there is a beautiful stained glass window of this Portuguese infanta who became Queen of the United Kingdom by her marriage to King Charles II.

Also the founder of the College - Queen Philippa de Hainault - was the wife of King Edward III who initiated the Anglo-Portuguese Alliance and mother of John of Ghent, Duke of Lencastre, who signed the Treaty of Tagilde with King Ferdinand of Portugal (1372).

Portugal-UK 650 is the initiative responsible for the celebrations of the 650th anniversary of the Anglo-Portuguese Alliance in Portugal and the United Kingdom.

Awarded with the two highest distinctions of Portugal and the United Kingdom, the High Patronage of His Excellency the President of the Portuguese Republic and the Royal Patronage of His Majesty King Charles III, the Portugal-UK 650 initiative aims to celebrate and make known the common history, to write new chapters of friendship, cooperation and trade, to develop scientific research on the Anglo-Portuguese Alliance, and to promote the values of the Alliance's founding Treaty in today's world - peace, friendship, truth, fidelity, constancy, solidarity, sincerity and kindness - ". ... there will henceforth be a true, faithful, constant, mutual and perpetual peace and friendship, union and alliance and a league of sincere affection" (Article I, Treaty of the Alliance, London 16 June 1373) - appealing to the responsibility and commitment of each one.

In the long term, Portugal-UK 650 hopes to contribute towards a safer and more fraternal society, with greater knowledge of its historical and cultural heritage, more international solidarity and strengthened dialogue, cooperation and friendship between the citizens of both countries.

Besides the celebration of the most important dates - the 650th anniversary of the Treaty of Tagilde (10 July 2022) and the Treaty of London (16 June 2023) - the Commemorations include a set of other initiatives, until 2023, in partnership with over 100 Portuguese and British institutions, in the areas of research, education, culture, trade, cooperation, military and social. To date, around 110 activities have taken place in both countries.


The programme for the commemorations of the 650 years of the Luso-British Alliance can be consulted on the website https://portugal-uk650.com, as well as on the initiative's social networks.